is a foundation started by the Mulder family with the aim to support young Filipinos with:

Passing on of Bernard Roosendaal on 23rd of October 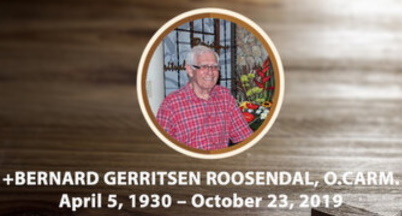 Father Bernard Roosendaal died on 23rd of October, his funeral was October 28th on the Philipines. Bernard was a strong local support for the Jan Mulder fund. Despite his age (89 years) and his vulnerable health, he was always very active in acquiring, coaching and PR of projects which fitted perfectly the goals of the Jan Mulder Memorial Fund.

On October 6th in Nijverdal, Carmelite Father Tom Buitendijk told full authentically and full of enthousiasm about the work of Jan Mulder for the Philipine people. He pointed out clearly that the project for 'Bakwit Iskul' fits very well in the way Jan Mulder worked and thought in the Philipines. The collected amount in the church was near € 700,- ; added to the gifts on the bank account, the 'Jan Mulder' weekend raised € 2745,-. A great amount, which may allow for another "Bakwit Iskul" or teachers and materials. Thanks to everone contributing in one way or another.
This project was also funded by the action in the Fasting period earlier this year; that raised € 3300,-.

The Lumads people live in villages on the isle of Mindanao, the Southern part of the Philipines. Most of them have to cope with severe poverty and lack of human rights. Multinationals are mining on a big scale for gold, silver, copper and alike. These enterprise use their Philipine connections and bribe government officials. The Lumads cannot do much to oppose these invaders.

Father Bernard Roosendaal emailed a video:
From about 4:00 minutes to 7:10 pupils sing an Engilsh worded song "Go away" about the militairies and invading companies, destroying their school and living area.

School for evacuees: Bakwit Iskul
There is a brilliant school idea: the Evacuee School: 'Bakwit Iskulâ. Bakwit Iskul's are ambulant schools, not on a fixed spot. De Lumads value this idea a lot, as the schools are their future! The leaders asked us for supporting the pupils in Talinkot, a small village in the mountains in Southern Mindanao where many evacuees have fled to.