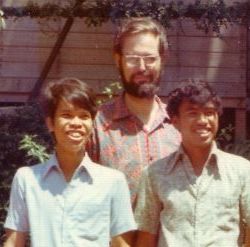 Jan Mulder was born in Nijverdal on September 26, 1940, son of baker Mulder.
Gifted with intelligence and a fabulous memory he completed his education as a preast rather easily, first in Zenderen and Dordrecht and later in Rome. He was ordained on July 9, 1966. After his ordination he studied Bible at the Catholic University of Nijmegen and at the Ecole Biblique in Jerusalem. He completed this study with a thesis on Psalm 45, verse 7a.

Jan left in January 1972 for the Philippines. In and around Manila, he lectured at various institutions. He was also much in demand for short courses.

He knew how to transfer his love for the Scriptures to others in vivid terms. Especially he confirmed his fellow friars in their commitment to justice and liberation from out the Bible.

He also spent lots of time and devotion to the underprivileged, the oppressed and the people in the slums.

In 1977 Jan’s life suddenly took a different turn. A tumor was found in his brains. A degradation process was initiated that gradually would break his body and would limit his capabilities. His great desire to live and his indestructible optimism got him through this difficult period helped. Jan was again able to go back to his beloved Philippines. He resumed his work as a teacher. After some years it turned out that the tumor was still active. After various medical treatments Jan finally returned to the Netherlands in 1989. He needed to be looked after and became confined to a wheelchair and in the end lost his speech.

Jan deceased in the nursing house St. Elizabeth in Delden, The Netherlands, on May 27, 1992.